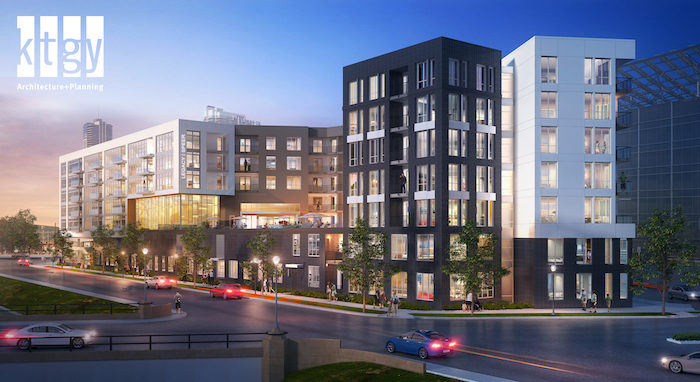 It’s an enviable spot: TriVista sits on the doorstep of downtown Denver, a stone’s throw from the banks of the Cherry Creek.

A block south of the Colorado Convention Center in Denver’s Golden Triangle neighborhood, the seven-story, 322-unit apartment building is named for three different panoramas: to the west, the mountains; to the north, downtown; and to the east, the Denver Art Museum and the heart of the Golden Triangle’s Cultural District.

“From a design perspective, the project name says it all: TriVista,” says Sean Smith, business development manager for Golden-based CFC Construction. “We have city, mountain and Cherry Creek views, because of how the creek and Speer Boulevard bisect the city grid at an angle.”

Each side has different branding – respectively, the glass-walled View Houses, the brownstone-inspired City Houses and the more whimsical Art Houses. The last of the three “responds to the lively character of the Golden Triangle,” says Kate Millenson of KTGY Architects in Denver. She previously worked on Legacy’s Point 21 apartment project in downtown Denver.

One key tenet of the design was to create a large building that would fit in with smaller neighbors. “It is a large site,” says Millenson of the 2.3-acre parcel. “It was really important for us to look at the site in broken-down sections and look at the character of the adjacent neighborhood.” 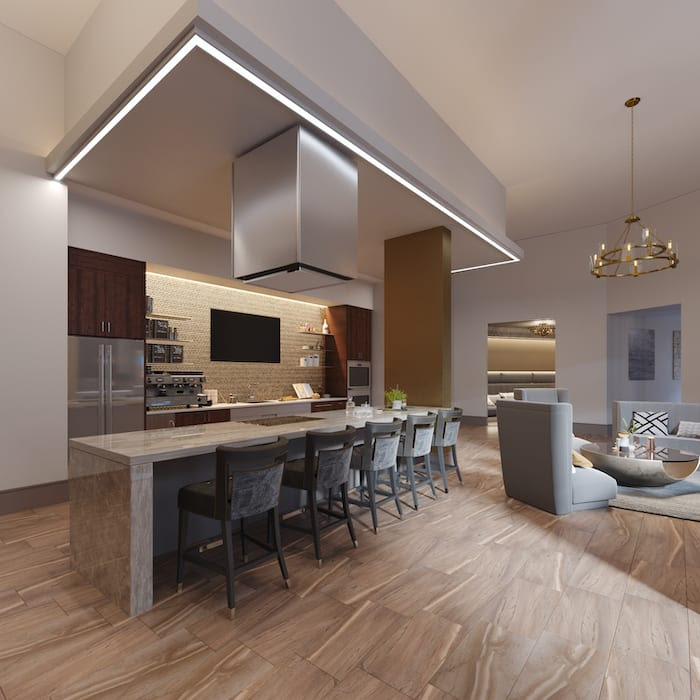 TriVista’s commercial-grade community kitchen meets “robust” construction and ventilation standards equivalent to a new restaurant, according to the builder.

The design allows a building that spans two city blocks to interface with existing development. “From a building massing standpoint, that was the hardest thing,” says Millenson of the 550,000-square-foot structure.

Overlooking the corner of 14th Street and Speer Boulevard, a rooftop deck also “helps bring down the massing,” she notes. “We tied it all together with the material palette.”

The project is standard in some ways and pushes boundaries in others. “We are five stories of Type III wood frame over two stories of concrete podium for structured parking,” says Smith. “This is fairly standard, but also as tall as the project could go from a building code perspective.”

The Golden Triangle’s registered neighborhood association provided input that helped shaped the design. “They really positively affected the project,” says Millenson. An example: four live/work units on the 14th and Galapago streets corner, seen as a gateway to the Golden Triangle. The first floor features a storefront and gallery or office space, with living quarters on the second floor. 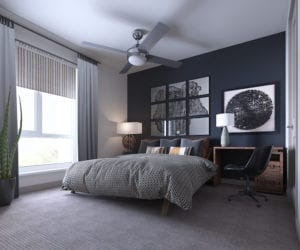 Smith says the urban location and tight site posed a few challenges. “The build-out was property line to property line on all sides, plus right-of-way improvements such as sidewalks,” he explains. “We were also restricted from closures on two of the three sides, with no closings allowed along Speer or 14th Avenue unless they were temporary and outside of rush hour. We also had to maintain access during any downtown events, and, being so close to Civic Center Park, that was often.”

He continues, “With this restriction on flexibility, site delivery and coordination became crucial to the project’s success. All deliveries were scheduled at minimum 48 hours in advance, and down to the minutes it would take to unload and also the pick-time for the crane to grab the load and drop it where it was needed.”

Another challenge: proximity to Cherry Creek. “Drilling concrete-pier foundations would have hit groundwater very quickly, meaning added expense in the design and construction of the foundations,” notes Smith. “On top of that, similar projects in the area that have followed this method of construction have required treatment for contaminants in the water. All of this would have added time and expense to the project.”

He says CFC’s “cost-saving solution” were Geopier Rammed Aggregate Piers (RAPs), which increased the bearing pressure of the ground and minimized the depth of excavation. Peterson Contractors installed 2,440 RAPs in a design by Ground Improvement Engineering.

Groundbreaking was in February 2017. After a little more than two years of construction, the first move-ins come in March; apartments average 935 square feet.

Smith highlights the “complete commercial-grade test kitchen” that will host cooking demonstrations with video cameras showcasing chefs at work. “While the 322 apartment homes all have kitchens, this one requires robust construction and ventilation standards that are the same as any new restaurant,” he says. “These details include a complete fire suppression system over the grill area and a fire-rated exhaust system through to the roof of the building.”

Smith says the construction process was “about as good as it gets” with minimal construction hiccups and maintaining the planned calendar. “Legacy has been a great client and partner in the project, and we have enjoyed a productive relationship with them throughout the project,” he says. “We have also done over $300 million worth of projects with KTGY since the recession, and they have been an invaluable partner.

“Our shared understanding of these projects and what it takes to make them successful – which can be most simply stated as properly detailed drawings and the right approach to construction – proves positive time and again, and TriVista is no exception,” Smith says.

“It’s been really great,” echoes Millenson. “We’ve worked with Legacy since 2011, and we have a great working relationship with them. CFC has also been a pleasure to work with. Construction has been really streamlined.”

Published in the March 2019 issue of Building Dialogue.