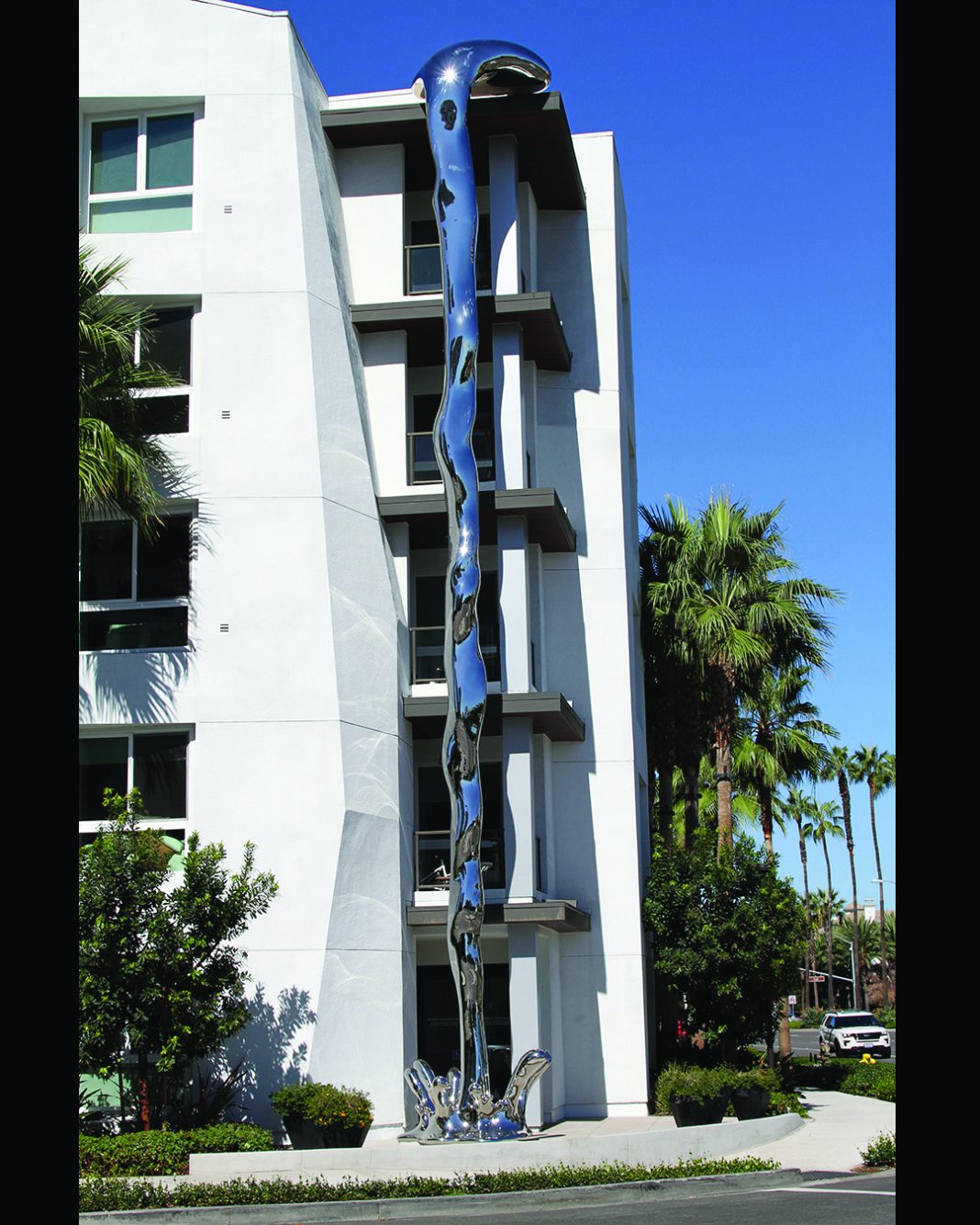 Fabricated from 316L mirror-polished stainless steel, “Mercury Falling” depicts pooling liquid mercury spilling from the roof of the building to the ground with a splash.

“As the building architecture is quite contemporary and hard-edged, the need for something more organic that would act as a foil against the angular building and bring some needed softness as it reflected nature and the surrounding sky,” said Dubin. “Mercury Falling was a result of many design iterations. It is also a metaphor for the hope that humans will act on climate change so that the ‘mercury’ will ‘fall’ as temperatures cool.”

In 2017, the owner of Skyloft, Sanderson J. Ray development, asked Dubin to visualize a concept for a large-scale sculpture for the new complex in the heart of Irvine. After five years in the making, the finished product was installed on Sept. 17.

Dubin has had an extensive career in painting, sculpture, ceramics, and design for more than forty years. He studied painting at the Art Institute of Southern California with Stephen Douglas, and sculpture and design with Kris Cox and Richard White. Dubin has also been the art director and production designer on seven films for O Entertainment. He currently maintains a painting and sculpture studio in Laguna Beach.

Dubin is also known for his politically and socially charged paintings that demonstrate his respect for formal portraiture while commenting on the times in which we live. He said he deploys references to our contemporary environment within his formally rendered portraits, allowing for a straightforward interpretation of his paintings.

“I like to create tension by juxtaposing expressive, lushly rendered figures while bringing awareness to social inequality, political unrest, and the climate crisis,” Dubin said.

The sculpture is located at 2700 Main Street, near Irvine’s Business Center. Skyloft Apartments is a five-story apartment community that opened in the fall of 2019 and features 388 studios and luxury apartments. Skyloft was built by Streetlights Residential, designed by Architects Orange, and managed by Legacy Partners. The community’s design is by Thomas Schoos, along with landscaping by Adam Schwerner.

“Skyloft makes a bold statement for its design, both inside and out, and Dubin’s masterpiece is both striking and thought-provoking,” Legacy’s Regional Manager Dawn Mills said. “Skyloft offers the ultimate contemporary coastal living experience in Orange County and is now adorned with contemporary environmental commentary relevant to life in southern California.”

To find out more information on the artist, visit www.jorgdubin.com.