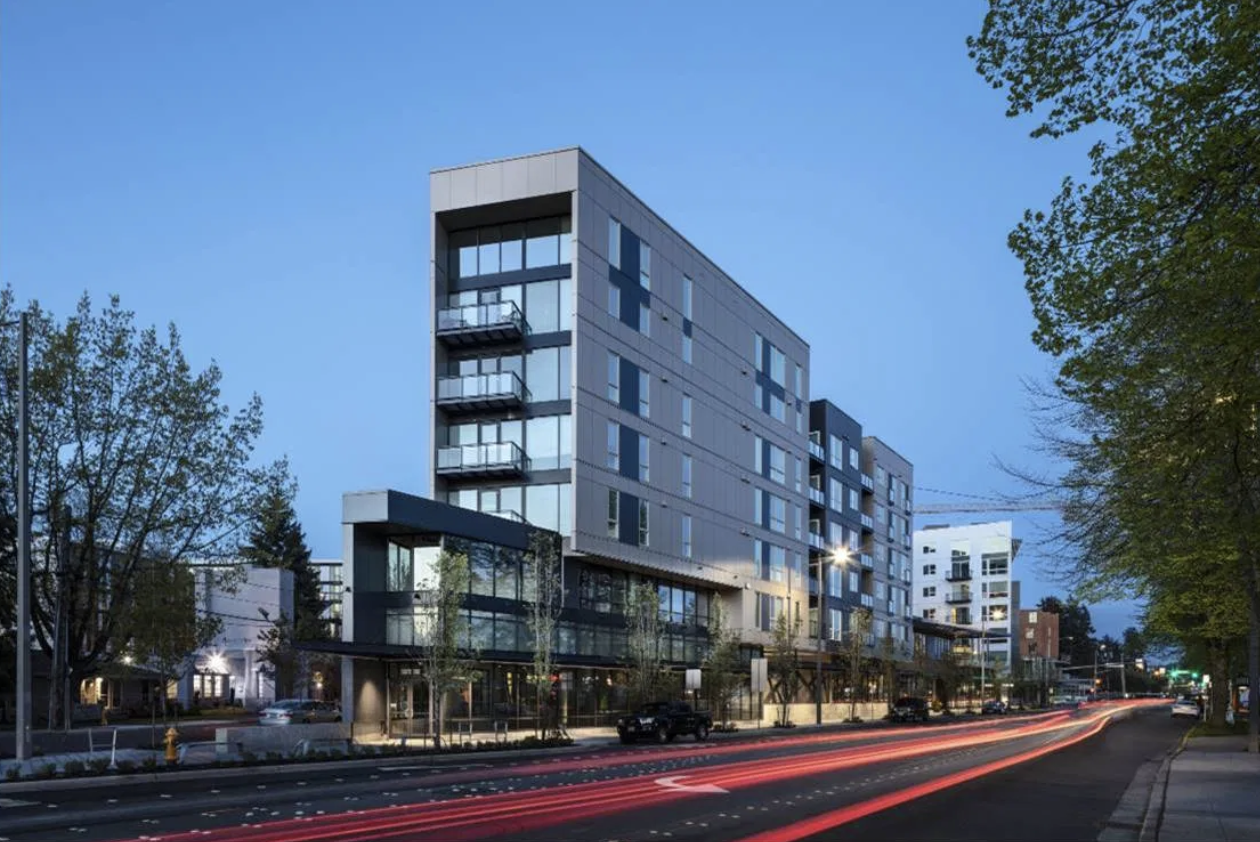 Developing a multifamily mixed-use building in suburbia comes with its typical challenges, where construction costs, limited space and neighborhood assimilation are only the tip of the iceberg when property owners are presented with the opportunity to construct. Now add to the equation a uniquely angular construction site, high water table and the Downtown Conversion Couplet Project and the sum equals one of Downtown Redmond’s newest developments: The Triangle.

The Triangle, a 195-unit luxury apartment building with commercial retail, speaks of its development challenges through its title alone. Designed on an irregular-shaped site that is barely an acre and just a block from Old Town Redmond, Seattle-based architect firm Tiscareno Associates and national real estate developer Legacy Partners strived to create a space that not only would fit seamlessly into the abstract frame of the site, but would also redefine the term “luxury” for Redmond suburbia. The project, which started in 2015 and broke ground in 2016, had no shortage of challenges, but the team ultimately overcame these struggles to develop the LEED gold-certified Flatiron Building of Redmond, receiving accolades from the community and national recognition from commercial real estate associations.

The original Flatiron Building, located in New York, New York, was originally opened in 1902. The landmarked building is a triangular-shaped, 22-story tall, steel building known for its design and pivotal location in Manhattan.

“We did a great job of bringing urban, downtown Seattle and all the sophistication and luxury to this more suburban market and have created a great living environment for people that want the best of both worlds,” said Parker Nicholson, development manager at Legacy Partners.

The Triangle, located at 16450 Redmond Way, is part of the city’s Downtown Conversion Couplet Project, an initiative that seeks to transform downtown Redmond into a more pedestrian friendly environment by converting Redmond Way and Cleveland Street into two-way thoroughfare. Proceeding with The Triangle required a lot of coordination with the city to align work schedules and resulted in the city removing 6,000 square feet of usable space from the already oddly-shaped site from the get-go. That chunk of space reduced the longest side of the site, and according to Bob Tiscareno, design principal and architect at

“We were excited about it,” Tiscareno said. “It would’ve been easier if it was a little wider, but that was the net usable site going into it.”

Nicholson added that the team was in favor of developing the building with the Conversion Couplet project at the forefront of its design because of the amenities it brought to the community. Not only would it help connect people to restaurants, parks and other attractive local features, but it would also help with the addition of new transit in the form of an upcoming light rail station, slated for use in 2024.

“We really liked the idea of committing to this road couplet project where you were slowing down traffic, creating a very positive, nurturing pedestrian environment, bringing restaurants and density to their downtown corridor and being basically a block and a half to future light rail,” he said.

Tiscareno added that city upzoning helped the team achieve its development goals. The project, which is adjacent to Old Town Redmond, would produce a significant jump in scale. There are a handful of small-scale commercial and brick buildings nearby that vary from one to three stories in height. Upzoning allowed for six-story developments in the area, like The Triangle, to encourage the development of multifamily apartment buildings to support people who worked nearby and might potentially take light rail in the future. To help with the upzone, the team broke down the massing of The Triangle and added unique corner shapements at each of the three corners, including a strong angular expression at the acute corner that was inspired by one of New York’s iconic buildings.

“The Triangle is a very visible and well-located space, so it was an opportunity to present itself as if this was Redmond’s ‘Flatiron Building,” Tiscareno said.

Tiscareno also emphasized the importance of the building’s main feature, which further assists with the scale relationship between the building and surrounding areas: the two-story entry at Redmond Way. When a person first walks into the building, they enter the lobby and located above them is a community space.

“Having that two-story element along the main facade be very functional and a high-trafficked area that the community gathers and crosses through every day was really important,” he said. “Creating the scale relationship with downtown was important and carried out in those (features).”

Another goal of the project was site plan efficiency. Given its irregular shape, the team didn’t have any amount of space that could be wasted. To achieve full usage of the site, they maximized the amount of parking spaces and placed amenities in locations where they could pull more focus.

“It was a consistent push-and-pull between the program and the forces of this inherent triangular shape,” Tiscareno said.

Odd angles weren’t the only development challenge the team had to overcome. The city’s aquifer is 10 to 15 feet below grade, which limited below-grade development. To mitigate this, the team pulled the parking garage out of the ground by four or five feet, which led to ensuring solid sidewalk to interior relationships on all sides of the building. They then wrapped retail around

the project to mask the parking courtyard. Because of this, Nicholson said the high water table presented many cost and coordination challenges with the city.

“The city’s drinking water supply right below your project obviously raises a lot of concerns and the need for a lot of mitigation efforts and dewatering efforts,” he said.

The team also realized that what initially was a challenge when the city removed 6,000 square feet of space from their construction site actually proved to be beneficial in the end.

“We were able to see through that by realizing that creating that nicer retail environment in the long run would far outweigh the losses we were expected to stomach,” Nicholson said. “We’re starting to see the benefits of the more expansive sidewalks and the slower pace of traffic. It was an expensive ask from the city, but at this point we think it was the right thing to do, and we’re very happy to embrace it.”

The Triangle, which opened for occupancy in November 2018 and held a grand opening in June 2019, has received many accolades for its trendsetting design, including LEED gold certification and NAIOP’s “Multifamily Residential Suburban Development of the Year” award. Amenities like sizeable green roof systems, higher efficiency appliances, electrical chargers for cars and high efficiency split systems for air conditioning all helped to achieve the LEED gold certification. Tiscareno explained the team also took care to use mechanical systems throughout the project that supported low energy usage and water conservation to help meet the basic standards for LEED certification.

“It’s become very important for both Legacy and our capital providers to address sustainability issues, not only for our company’s goodwill, but also because it’s a major concern of our tenant base,” Nicholson said.

Other amenities that add to The Triangle’s appeal include a fitness center which features a rock-climbing wall and a coworking area with free Wi-Fi and coffee, along with two retail spaces at ground level, one of which will house a Belgian bakery expected to open soon. Both Tiscareno and Nicholson agree that uniquely designed architecture may be more of a trend in the future as the standard “box-shaped” apartment buildings of urban and suburban areas are redeveloped into buildings with design solutions to overcome challenges like The Triangle. In other words, it may be a first in many different ways, but it will not be the last.

“[The Triangle is] a strong design solution for a very challenging site to enable transit-oriented development in Downtown Redmond,” Tiscareno said. “Despite a footprint where nothing is square, The Triangle makes a near-200-unit apartment building look like the most natural use for the site.”