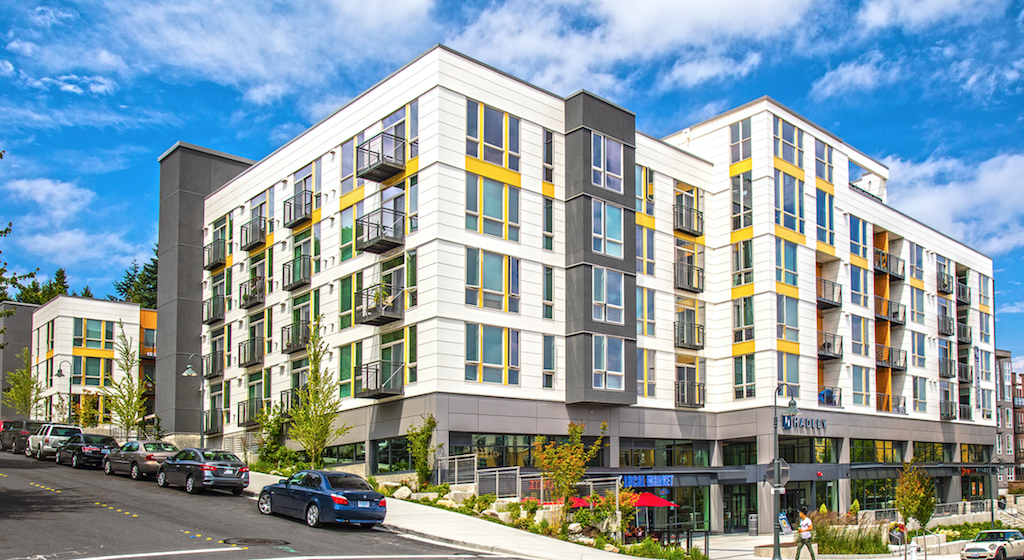 The last big new apartment complex to go up in Mercer Island’s town center has sold for $95.75 million.

Despite the town center’s location near the current transit station and future light-rail stop, no other apartment buildings have been built in the neighborhood in recent years. Global real estate company Hines had proposed a five-story project with up to 200 units and space for a grocery store, but dropped the plans after the city commission asked Hines to update the project’s design, city Development Services Director Scott Greenberg said.

Kerry Nicholson, senior managing director at Legacy’s Seattle office, said that among investors there was “very strong interest” in the Hadley.

This is due in part to Mercer Island’s status as one of the wealthiest ZIP codes in the Puget Sound region. Average annual income on the island, which is home to billionaire Paul Allen, is $193,750, second behind Medina. The full list of the region’s wealthiest ZIP codes is here. Also, it can be difficult to develop on Mercer Island, where no other large apartment projects are in the works.

The nearly one-year-old Hadley was built on leased land and is 95 percent leased, according to Legacy. A leasing agent for the property said the starting rent for a large studio is just under $1,800. A one-bedroom starts at nearly $2,050, and there’s one two-bedroom listed at $3,900 a month. The Hadley is offering one month’s free rent and is waiving nearly $750 for move-in fees.

The Hadley has what Legacy said are state-of-the-art appliances and finishes. Amenities include a rooftop deck with a barbecue and fireplace. The underground parking garage has 237 stalls.